Home » GENERA C » Cheiridopsis » Cheiridopsis minor
Back to Category Overview
Total images in all categories: 11,506
Total number of hits on all images: 6,488,452 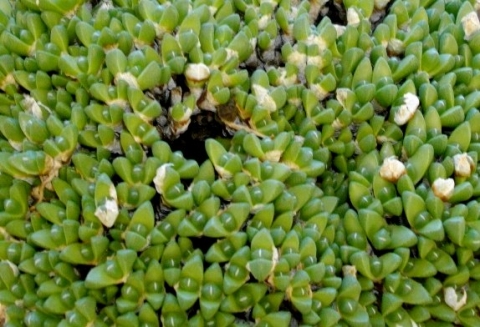 Cheiridopsis minor is a dwarf leaf succulent, a mat-forming perennial that branches much on the ground. It achieves heights below 2 cm and spreads up to 15 cm in diameter.

This plant produces the smallest leaves in the Cheiridopsis genus. They grow spaced on short internodes, presenting two different shapes depending on age. The similar, paired, opposite leaves start off semi-globular and thickly succulent, developing a short oblong shape, triangular in cross-section. The leaf has a flat surface on the inside where the slit between the members of each pair is found. The outside keel of the leaf is rounded, curving inwards at the top with a row of papillae occurring along it.

The leaves resemble those of C. meyeri, but are smaller, only 6 mm to 9 mm long and 4 mm wide. Persisting brown to whitish skins of old leaves serve as partial sheaths around new leaves for some time.

The yellow flowers are carried on short stalks.

C. minor is endemic to the Northern Cape where it grows in arid, exposed conditions. It is not considered to be threatened in its habitat early in the twenty first century.

The species was previously called C. meyeri var. minor. This species, C. minor, differs from C. meyeri in its valve wings and by a much higher degree of branching (www.llifle.net; www.redlist.sanbi.org).