Home » GENERA C » Cheiridopsis » Cheiridopsis pillansii
Back to Category Overview
Total images in all categories: 12,091
Total number of hits on all images: 7,393,244 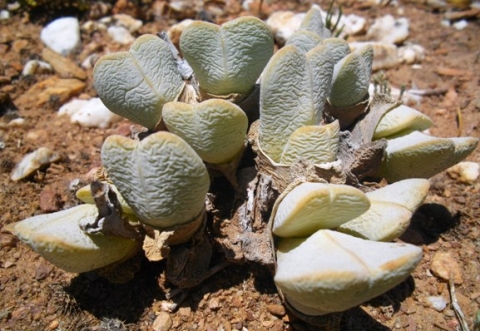 Cheiridopsis pillansii is a small cushion-forming or clumping, low-growing succulent perennial from the Aizoaceae family. The stems branch at ground level. They are short and produce just one or two leaf pairs each. The leaf-pairs are similar and grow from the centre of older pairs. The leaves are pale grey with a mottled surface.

Each flower stalk protrudes above the leaves to present a single yellow flower in autumn, 8 cm in diameter, with an orange tinge on the petal tips.

The plant in picture seems stressed from the summer drought and maybe from the absence of shade, a rare feature in the species habitat.

The distribution range is in the northwest of the Northern Cape, limited to a part of the Richtersveld north of Lekkersing.

The habitat is arid scrub, the plants growing exposed in gravelly and sandy terrain where the low rainfall is received in winter, the growing season of these plants. The species is not considered to be threatened in its habitat early in the twenty first century (Frandsen, www.cactuspedia.info; http://redlist.sanbi.org).