Home » GENERA C » Cheiridopsis » Cheiridopsis derenbergiana
Back to Category Overview
Total images in all categories: 11,549
Total number of hits on all images: 6,634,873 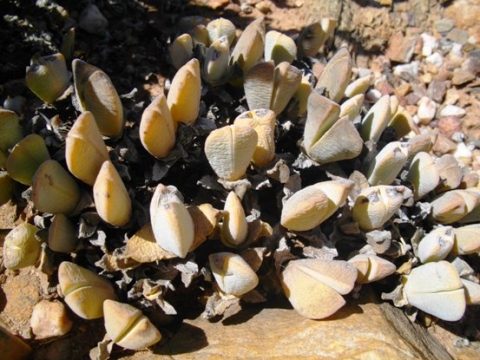 Cheiridopsis derenbergiana is a much branched, spreading dwarf perennial of the Aizoaceae family. It bears lemon-yellow flowers. The leaves grow in pairs that are almost equal in shape. They are stout, smooth keeled, shaped as small triangular columns and have velvety smooth surfaces.

The plants grow in nature in an arid habitat on rocky slopes in Namaqualand. It was earlier known as C. citrina.

In some Cheiridopsis species the leaf pairs are similar, in others they are of unequal length. There are about 33 species in this variable genus. Subsequent leaf pairs may not look very similar, their shapes or degree of fusion differing.

The generic name, Cheiridopsis, is derived from the Greek words cheiris meaning sheath and opsis meaning a resemblance. This refers to the feature of a new pair of leaves emerging from a sheath formed out of the previous pair. The old pair had dried during the past resting season into a papery covering for the emerging pair. This serves as protection for the new leaves during the resting period (Smith, et al, 1998).