Home » GENERA C » Cheiridopsis » Cheiridopsis namaquensis
Back to Category Overview
Total images in all categories: 12,091
Total number of hits on all images: 7,393,182 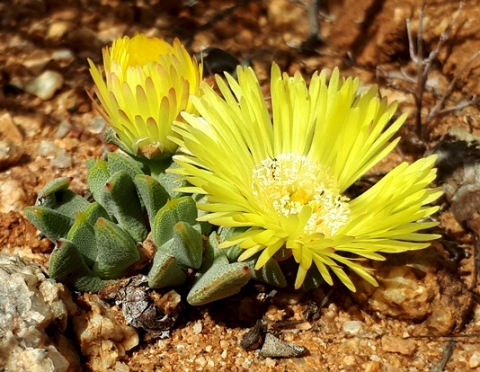 The erect leaf-pairs are opposite, pressed against each other when not forced open by flowers or new leaves. The leaf is triangular in cross-section from a deep keel, particularly at its angular tip. A tiny pointed protrusion is visible at the leaf tip, a mucro. The leaves are pale grey-green, covered in tiny, dark spots, bulges or papillae.

The flowers grow solitary on short stalks. The pale yellow flower has several rows of narrow, round-tipped petals, appearing slightly purplish near the tips on their outer surfaces in picture. An open flower spreads to 4,5 cm in diameter, opening in the early afternoon on sunny days. The blooming happens in late winter and early spring. The photo was taken early in August.

The fruit capsule has about ten or a few more locules. Covering membranes and large covering bodies are present. The capsule opens when in contact with moisture, closing when dry. Seed dispersal happens in instalments with every spell of rain until the containers are empty.

The species distribution is from the Richtersveld through Namaqualand into the Western Cape to east of Laingsburg.

The habitat is open, semi-arid land in hilly terrain receiving winter rain on sandy soil. The species is not considered to be threatened in its habitat early in the twenty first century.