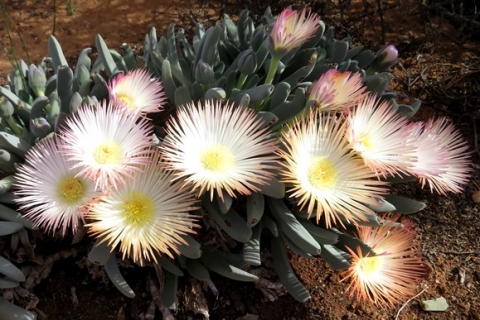 The flowers are mainly white on this Cheiridopsis denticulata plant, starting off with a faint pinkish hue probably restricted to the outer surfaces.

Fading to an apricot colour occurring here may be counter-culture: young flowers of some plants in the species are coloured apricot, thought to fade into white. This makes the sequence of colour change in the species somewhat puzzling. Could the lighter ones turn dark and vice versa? Unless there are two plants here, grown close enough to each other to cause the confusion.

Both the whiter and the apricot forms were seen in August in the same area on the road between Springbok and Steinkopf (Smith, et al, 2017; Manning, 2009; Le Roux, et al, 2005; iNaturalist).