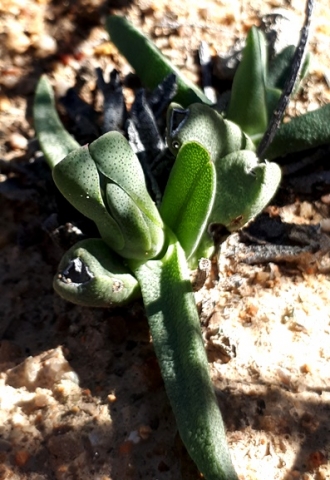 Cheiridopsis namaquensis is heterophyllous, meaning that its leaves take on more than one form on the same plant. Leaf pairs standing stiffly erect with the inside surfaces of the pair tightly together, are forced apart from the growth of new leaves as in the photo or the emergence of flowers that also emerge from the stem-tip.

Some old leaves thus parted may lose enthusiasm for being upright and sprawl outwards, elongated as seen here. There is some channelling on the inside of the leaf. The leaf margins are sharply angular in their lower parts while the keel is sharply formed near its tip.

The dark leaf mottling is conspicuous on the leaves in picture, yellow and translucent against sunlight and bulging papillae on old leaves (Le Roux, et al, 2005; iNaturalist).