Home » GENERA C » Cheiridopsis » Cheiridopsis purpurea flower
Back to Category Overview
Total images in all categories: 12,061
Total number of hits on all images: 7,359,922 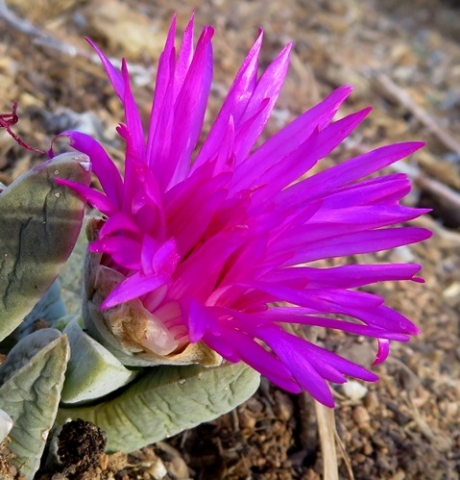 The short-stalked flower of Cheiridopsis purpurea grows solitary from a slit in a leaf pair at the tip of a short stem. Purplish-red to pale purple petals in several whorls angle up and outwards around the dark flower centre.

In picture the sepals appear dried out around the fairly erect, broad and pointed petals; on other flowers the sepals may be leaf-like and still succulent. Cheiridopsis flowers have nectar glands in the flower base forming a ring around the feathery stigmas.

The flowers are scented, opening to a diameter of 4 cm. They open near noon and close near sunset. This flower was seen in August in the Hester Malan Succulent Garden in the Goegap Nature Reserve.

Another species, C. glomerata also flowers purple but has shorter, more globose leaf pairs. These two species resemble each other not only in colour, but also in having a multitude of petals that do not spread widely, rather angling upwards and partly concealing their stamens (Williamson, 2010; Smith, et al, 1998; Herre, 1971; iNaturalist).