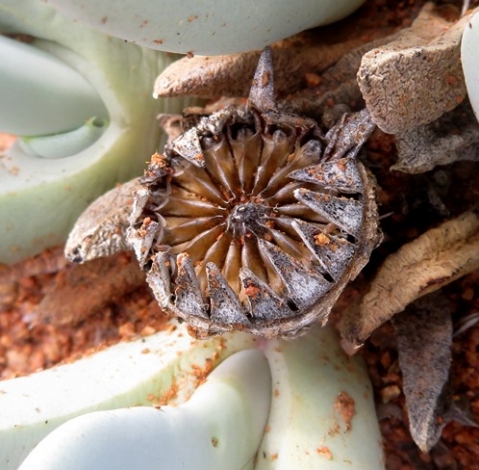 The old Cheiridopsis denticulata fruit has by now yielded all its seeds to the big wide world. The valves had opened periodically when wet, closing when dry, until all was dispersed, some hinges succumbing to the exercise, their valves dropped off.

Where locules have lost their triangular valves, revealing residual parts, they resemble open coffins showing the faces of the deceased ready for burial. The "corpses" are arranged in a circle with feet together, as might be done by a primitive tribe worshipping the sun or the holy mesemb not yet called Cheiridopsis.

How to deal with mass burial in a fantasy? The ceremony for more than a dozen departed elders, dying from a mysterious pestilence of the old days, must have served to appease the unrelenting vygie god… or another story of similar ilk. If the tribal elders lacked the imagination for conceiving suitable rituals, a naïve adolescent, known to be somewhat funny, contemplated the vygie in prolonged and intent stare and eventually had a vision. The elders must henceforth adhere to a solemn ceremony involving strict rituals as revealed to the divine messenger of sheer bullshit. The absence of eletronic entertainment never stopped humanity from enjoying life in some weird and wonderful way.

C. denticulata was previously known botanically as C. candidissima, the extremely truthful Cheiridopsis. It's true, go check! The indigenous tribal name (probably Nama), was t’noutsiama, its meaning, in plain truth, unknown. But there was this youngster, called t'nou... Some stories are stillborn.

The dry leaf surfaces around the head appear granular like sandstone, contrasting against the smooth, white fleshiness of adjacent new leaf-pairs, fused at the base. There is still life in the body.