Home » GENERA E-F » Ficus » Ficus tettensis leaves
Back to Category Overview
Total images in all categories: 11,131
Total number of hits on all images: 5,810,178 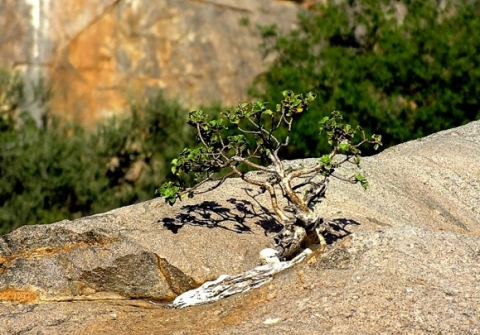 The small, simple leaves of the deciduous Ficus tettensis spiral around the stems, mostly only the stem-tips. They are thick and densely velvety with silvery hairs; three-veined from the base. There are about five pairs of creamy veins in all ascending from the midrib, prominent on the lower surface with net-veining clearly visible. The lower surface is even paler green than on top where the surface is rough.

The leaf is kidney-shaped to heart-shaped, wider than it is long, or as wide. The tip is rounded or broadly tapering and blunt, the base lobed. The margins are entire and wavy. Leaves become from 2 cm to 5 cm long, although the small-leaved rock fig may have some leaves that are 9 cm long. The petiole is up to 3 cm long and there are large, pale brown stipules at its base, only lasting while the leaf is young.

F. glumosa has larger, similar leaves that are not wavy; and bigger fruit.

Note the amount of flat, white bark plastered, totally exposed on the rock. There may be more bark surface on the rock than on the erect stems above.

Imagine the amount of invisible rooting and the distance it has already travelled, down into the unseen in the quest for earth (Erasmus, 2016; Coates Palgrave, 2002; Schmidt, et al, 2002; Van Wyk and Van Wyk, 1997; Van Wyk, 1984; iNaturalist; www.zimbabweflora.co.zw).