Home » GENERA E-F » Ficus » Ficus salicifolia leaves
Back to Category Overview
Total images in all categories: 11,662
Total number of hits on all images: 6,774,610 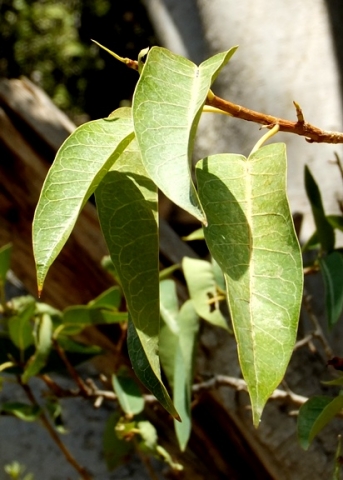 The leaves of Ficus salicifolia are mostly alternate on cream coloured petioles varying from 5 mm to 5 cm in length. There are small leaf stipules that drop off early.

The leaf shape is ovate to elliptic or oblong, the sides almost parallel, curving up or folding in. The leaf base is nearly square to slightly lobed, the tip tapering or almost rounded, but in the photo strongly pointed. The texture of the dull to dark green leaves is hard and leathery.

The leaf midrib is pale as are the spaced, ascending lateral veins that curve in before the margin, joining the next vein in a scalloped pattern near the margins, all the way from base to tip. The common leaf size is about 7 cm by 3,5 cm.