Home » GENERA E-F » Ficus » Ficus salicifolia, wondering about the wonderboom
Back to Category Overview
Total images in all categories: 11,779
Total number of hits on all images: 6,931,734

Ficus salicifolia, wondering about the wonderboom 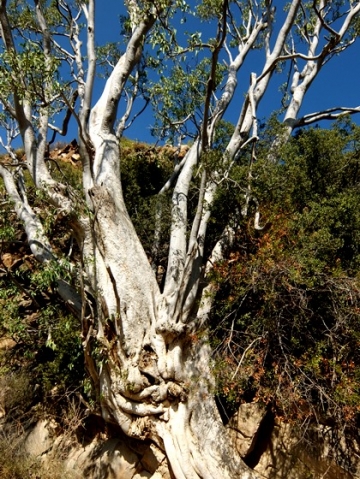 This pale-stemmed fig tree growing in the southwestern Karoo near the Swartberg Mountains is thought to be Ficus salicifolia. The leaves appear too narrow for F. cordata and the tree grows outside the natural distribution areas of either species; even further from where F. salicifolia could be expected to grow.

Many trees have been planted on farms outside of their natural hangouts. A F. cordata tree resembling F. salicifolia growing in an unusual place may be not so unheard of. So this presumed wonderboom presents more to wonder about than merely marvelling at its famous growth form. There are opinions about linking F. salicifolia and F. cordata, for instance by considering the former a subspecies of the latter as they once were. The link does alleviate some ambiguity around this posting.

The mother (or father?) of all wonderbome (or booms?) is of course north of Pretoria where it has been drooping branches for a thousand years or so, rooting at branch tips to form a small forest comprising just one tree. Go pay respects if you are in the area; it is monumental (Coates Palgrave, 2002; Pooley, 1993; Van Wyk and Van Wyk, 1997; iSpot).