Home » GENERA D-F » Ficus » Ficus tettensis far above the elephant
Back to Category Overview
Total images in all categories: 10,696
Total number of hits on all images: 5,357,096

Ficus tettensis far above the elephant 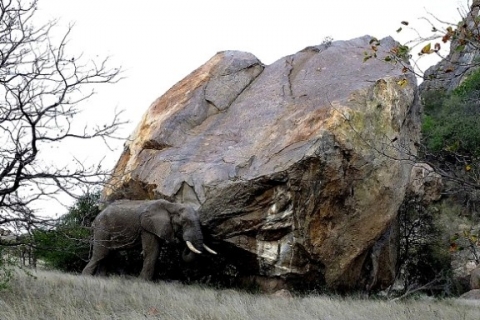 The Ficus tettensis at the top of this rock will never be bothered by the elephant below, renowned tree-breaker that it is. Ironically, the little wannabe tree sits up there on its naked rock, far above the ground, at heart a soil maker.

It will probably never sink a root into open soil anywhere… simply too much rock to split. But the bookies won’t pocket their winnings soon, as the record attempt won’t be over for a long time. Trust F. tettensis to ensconce itself in such almost impossible locations among boulders and rocky crags as here in the Kruger National Park.

Its role in nature is to break the rock for plants of many kinds to live comfortably in these daunting places centuries from now. Painstakingly, the roots split the big ones and break off little pieces of rock by exerting the slowest, most inexorable living force, turning rock into gravel. Soil? Much later via several communal processes in a slow, tedious affair.