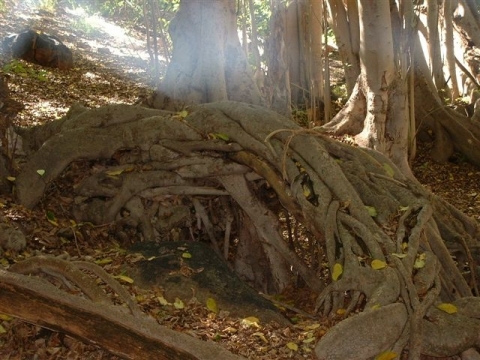 Ficus sur thrives in water rich areas. These roots were photographed near a permanent water source in the Baviaanskloof where a small natural Ficus sur forest has been established for many years.

The sur part of the name refers to a region of Ethiopia. The species distribution covers all of tropical Africa as far as Ethiopia in the north.

The wood has been used in the past for making drums and mortars for grinding grain, by hollowing out the soft, white centre of a stem. It also served the Bushmen well as a base in their legendary method of starting fire through friction between sticks.

People, monkeys, many bird and insect species value the figs as food. Some medicinal uses have been recorded, including improvement of human fertility and increasing milk production in cows (www.plantzafrica.com).