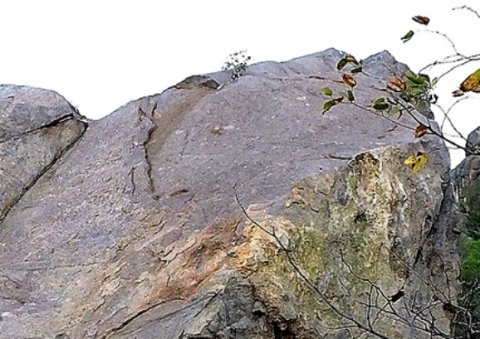 Ficus tettensis, the small-leaved rock fig and previously F. smutsii, is a small, lithophytic, rock-splitting shrub or tree with sparse, rounded crown. In better conditions than here it reaches heights up to 12 m (SA Tree List. No. 62). Check carefully, it's not the tree on the right, but the small one on top of the rock.

The bark on the squat, convoluted stem of a F. tettensis tree is white, yellowish or very pale grey, often smooth, also on some exposed, lace-patterned roots that cling to sheer surfaces en route to hidden places where the ample soil nirvana may one day be reached. Bark on old stems flake in patches, leaving colour contrasts. There is a milky latex, no aerial roots. Young twigs are hairy.

The figs are borne solitary or in pairs, growing from leaf axils. They are hairy when green, rough, warty and red when mature. The sessile or shortly stalked fruit are about 1 cm in diameter, often a little smaller. The fruits are eaten by animals and birds, not tasty to people. They are mostly seen from mid-autumn to early summer.

The species distribution, mostly in Africa to Guinea, Ethiopia and Somalia, is in South Africa restricted to parts of Limpopo and slightly into Mpumalanga. The specific name, tettensis, is derived from the Mozambican town and province, Tete, where the plant was first collected.