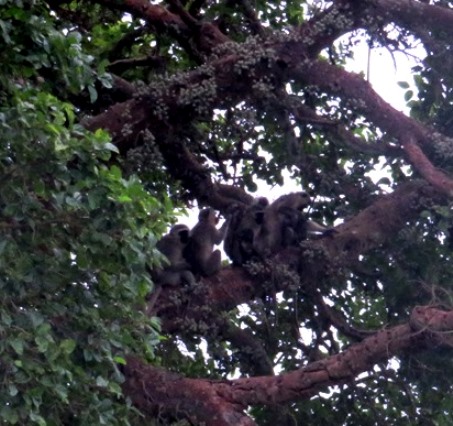 The figs of Ficus sycomorus subsp. sycomorus are chosen by this vervet monkey family for their afternoon meal by the Crocodile River south of the Kruger National Park. One can see why. The branches are sufficiently stocked and offer comfortable seating. The yellow and reddish ripe figs have to be selected from among many green ones depending on the season, but no worries, fig tree merchandising in season leaves nothing to be desired.

Vervets are agile enough to negotiate branch shapes and distances up high as effortlessly as people take seats in a restaurant. The figs often full of insects when ripe, protein enrichment never bothers no monkey (or bird that frequents these facilities).

It is not known whether monkeys are sometimes stung by the pollinating wasps spending time inside these figs. Maybe they learn to chew fast for reducing risk.

There are figs present in great numbers on a big Lowveld F. sycomorus during the second half of the year, but customers are often accommodated during the rest of the year as well. The nearly spherical to slightly flattened sycamore figs reach sizes up to 3 cm in diameter. Sometimes hairy, the figs are often marked with faint, longitudinal lines.

It is not only monkeys, birds and bats that eat the sycamore figs: Tonga women dry them as a delicacy still today, while the ancient Egyptians are known to have eaten them when Moses still hiked along the dunes. Bush pigs and antelopes will feast on fallen fruit under the tree; and leave fertiliser for next year’s crop. If you can obtain the recipe or wish to experiment, a soup is made of these figs.

This subspecies bears short-stalked figs in heavy masses on small, leafless branchlets of the trunk and main branches. There is also F. sycomorus subsp. gnaphalocarpa growing further to the north in the Limpopo province. It bears one or two figs per leaf axil, often when the leaves have already fallen (Coates Palgrave, 2002; Schmidt, et al, 2002; Pooley, 1993).