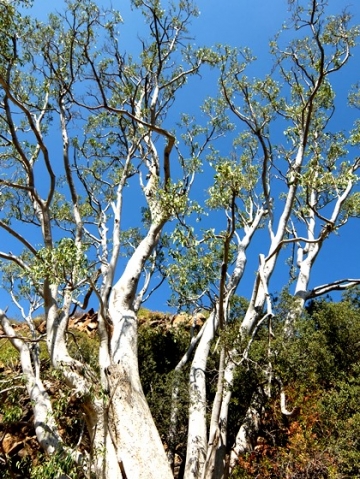 The bark is said to be grey and rough, usually dark on older trees, pale grey and smoother on younger ones. This one has a pale, creamy grey trunk with slight flaking, not appearing young at all. Aerial roots are usually present.

The small figs on short stalks are massed on side branchlets growing from leaf axils. They start off creamy white, turning pink or red with white speckles. Fig diameter is from 5 mm to 8 mm. They are seen on the tree from late winter to the following autumn.

The species distribution is in the northeast of South Africa, in northern KwaZulu-Natal and north of the Vaal River, as well as widespread across Africa. The tree is found in kloofs, along watercourses, on rocky outcrops, hillsides and woodland. The species is not considered to be threatened in its habitat early in the twenty first century (Coates Palgrave, 2002; Pooley, 1993; Van Wyk and Van Wyk, 1997; iSpot; www.redlist.sanbi.org).