Home » GENERA E-F » Ficus » Ficus sycomorus stems
Back to Category Overview
Total images in all categories: 11,792
Total number of hits on all images: 6,949,350 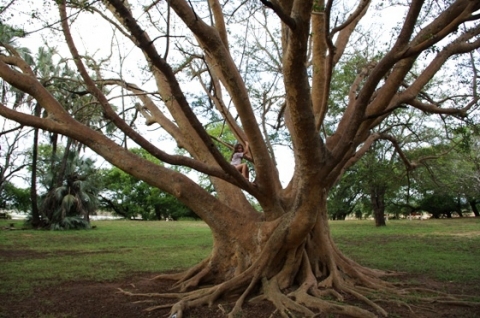 The stems of Ficus sycomorus (SA Tree List No. 66) grow large, branching and spreading. Below the point where they usually separate low down on the bole, it is huge with much folding and buttressing in evidence. Higher up the branches are cylindrical. In this species the branches do not carry aerial roots. Close to the stem, the upper parts of roots of this tree emerge above-ground with surfaces matching the bark on the trunk. The bark is yellow, yellowish orange, pale green or creamy brown as in the photo. Its surface is powdery and smooth, sometimes flaking in small pieces. Young branchlets are covered in rough hairs. The bark of this tree, as well as the white latex, feature in traditional medicines.

The figs of F. sycomorus are comparatively large, up to 3 cm in diameter. The fig shape is globose or slightly flattened. They are yellow to red in colour and occur throughout the year, more so in the second half.

Trees with fruits hanging from short stalks in branched masses from the large stems may belong to F. sycomorus subsp. sycomorus; if they occur singly or in pairs from leaf axils, often after the leaves have dropped off, the tree is usually subsp. gnaphalocarpa. Both forms of fruit-bearing may also occur on the same tree!

In South Africa this tree is only found in the north-eastern low elevation regions with warm climate of KwaZulu-Natal, Mpumalanga and Limpopo. In Africa it grows naturally across much of the continent. The habitat is often stream-banks and alluvial soils in woodland. This specimen was photographed in a rest camp of the Kruger National Park, possibly Letaba (Coates Palgrave, 2002; Van Wyk and Van Wyk, 1997; Schmidt, et al, 2002).