Home » GENERA D-F » Ficus » Ficus tettensis, the small-leaved rock fig
Back to Category Overview
Total images in all categories: 10,855
Total number of hits on all images: 5,508,090 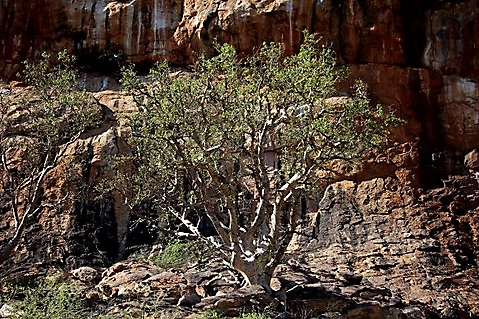 The life of a Ficus tettensis tree, also called the Smuts fig, growing against a cliff with a view can be something spectacular. It’s not about power or resilience, it’s both. Considerable time is taken. The tour de force in overcoming challenges exemplified by this tree from sapling to old age inspires its onlookers, delight them in its prime.

The amply branched cream to beige stems reflect much sunlight. There is usually a lot of it here. Leaves on the smaller branches are mainly at higher levels where the fruits also grow, catching the breeze.

Some dark markings left by lost lower branches and a few dead ones still lingering are visible in the lower parts. No longer needed or unsustainable parts drop off in the fullness of time without help. The sustenance gleaned by the roots over the years ongoingly determines the possible for a tree.

The naturally discoloured rockface behind tells of durability in a spot where nature is undisturbed, doing the unusual. Things change slowly here; the living is dignified.