Home » GENERA D-F » Felicia » Felicia merxmuelleri
Back to Category Overview
Total images in all categories: 9,180
Total number of hits on all images: 4,099,731 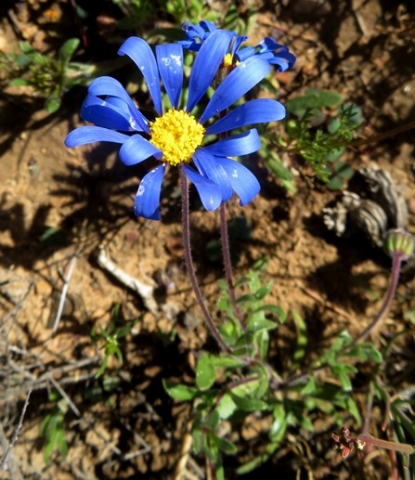 Felicia merxmuelleri, commonly the Namaqualand felicia or umbrella felicia and in Afrikaans sambreeltjies (little umbrellas), is a slender annual reaching heights from 5 cm to 25 cm.

The species distribution is in the west of the Northern Cape, mainly Namaqualand and the northwest of the Western Cape as far south as Clanwilliam and Ceres; also in southern Namibia. The photo was taken on the Matjiesfontein flower farm near Nieuwoudtville.

The plants grow on rocky or gravelly lower slopes and flats. The species is not considered to be threatened in its habitat early in the twenty first century (Manning, 2009; Leistner, (Ed.), 2000; Bond and Goldblatt, 1984; iNaturalist; http://redlist.sanbi.org).