Home » GENERA D-F » Felicia » Felicia hirsuta
Back to Category Overview
Total images in all categories: 8,965
Total number of hits on all images: 3,975,408 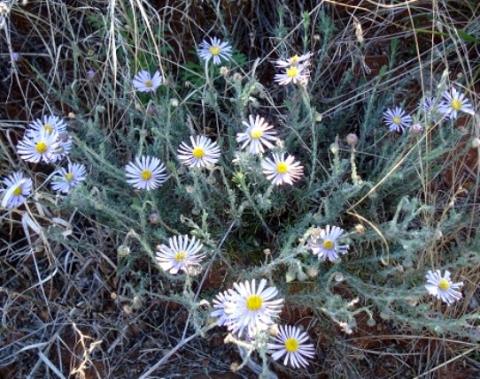 Felicia hirsuta is a sprawling shrublet varying from 10 cm to 60 cm in height. The distribution of the plant is wide in southern Africa, ranging from Namibia across the Northern Cape to inland parts of the Western Cape and the Free State. The habitat is often dry flats or lower slopes, but the plant copes with widely variable conditions across the large are in which it grows.

The plant population has been reduced by overgrazing as it is one of the palatable species, sought after by livestock. Still, the plant’s continued existence in nature is not under threat early in the twenty first century (Bond and Goldblatt, 1984; Shearing and Van Heerden, 2008).