Home » GENERA D-F » Felicia » Felicia filifolia
Back to Category Overview
Total images in all categories: 9,574
Total number of hits on all images: 4,303,397 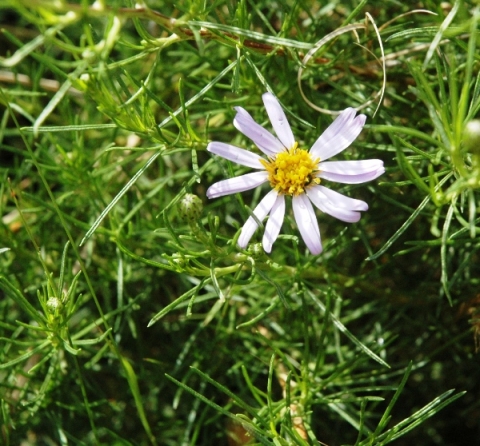 Felicia filifolia, previously Aster filifolius and commonly known as draaibos in Afrikaans, is a low-growing, evergreen and hardy, sprawling shrub that may reach about 1 m in height. The bark is finely ribbed and brown on brittle, woody stems. The leaves are needle-like and clustered in tufts at the branch tips.

The flowers are daisies with pinkish-mauve ray florets and yellow disc flowers. A profusion of flowers covers the bush in spring. The cup of the flowerhead has several rows of narrow bracts.

The species distribution is widespread, covering the southern and central parts of South Africa, reaching as far north as the Free State, Mpumalanga and southern Limpopo. The plants are commonly seen in rocky mountainous terrain. None of the four subspecies of F. filifolia occurring in South Africa is considered to be threatened in its habitat early in the twenty first century (Manning, 2009; Tree Society of South Africa, 1974; www.redlist.sanbi.org).