Home » GENERA D-F » Felicia » Felicia hirsuta
Back to Category Overview
Total images in all categories: 9,906
Total number of hits on all images: 4,611,864 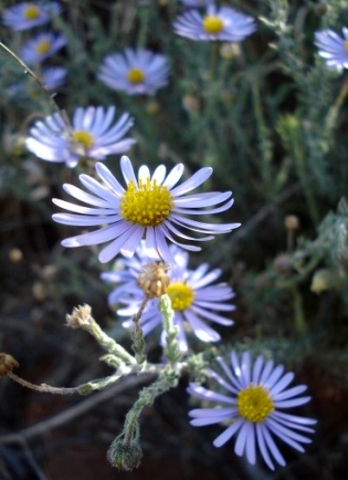 The flowerhead of Felicia hirsuta, in Afrikaans the bloublommetjie (little blue flower) of the Karoo, has blue or mauve ray florets around its yellow centre of tiny disc florets. Flowers are similar, but a little smaller than several of the other well-known Felicia species of the region.

Ray florets of this and some other Felicia species tend to fold back under the yellow disc florets at night, causing flower colour appearance to change from yellow in early morning when the blue (or mauve) colour returns in the sunlight.

This plant may produce flowerheads at any time during the year. The photo was taken in September near Olifantshoek in the Northern Cape (Bond and Goldblatt, 1984; Shearing and Van Heerden, 2008).