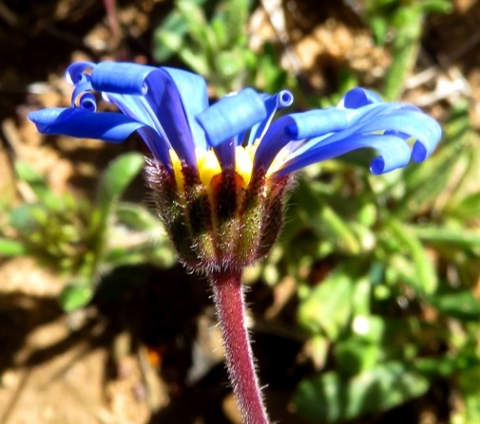 The involucre of Felicia merxmuelleri in picture appears to have only one row of bracts. The genus, however, is described as having from two to four rows on all species. When there are only two rows they don’t overlap, but are “strictly” equal, apparently on top of each other.

At the bract tips it is possible to see two kinds of tips: one hairy, green and narrowly pointed, the other broadly rounded, membranous and translucent. These bracts have long, slender, roundly bulging blades like worm bodies, neatly aligned around the flowerhead with gaps between them.

The involucre is cup-shaped to bell-shaped, depending on the cups and bells of one’s world. The rays are about double the length of the bracts. There are no scales on the receptacle at the base of the involucre (Manning, 2009; Leistner, (Ed.), 2000; Bond and Goldblatt, 1984; iNaturalist).