Home » GENERA D-F » Felicia » Felicia merxmuelleri flowerhead
Back to Category Overview
Total images in all categories: 8,955
Total number of hits on all images: 3,970,404 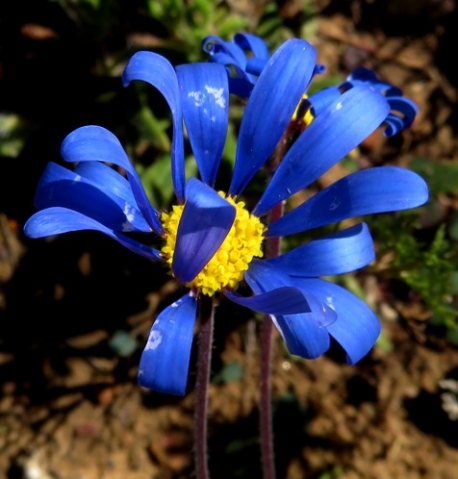 The flowerheads of Felicia merxmuelleri are borne solitary on long, hairy but otherwise naked peduncles. In picture they are dark purple, sometimes reddish purple.

The bulging yellow disc of the flowerhead comprises many fertile, five-lobed disc florets. It is surrounded by one sparse row of blue ray florets. These are wedge-shaped, tapering to the base and round-tipped, in picture straight and angled up, while recurving in their upper parts. Flowerhead diameter is 2 cm to 3 cm.

The ray fruits to come will have no pappus bristles. Blooming happens late in winter and early in spring. The photo was taken in August (Manning, 2009; Leistner, (Ed.), 2000; Bond and Goldblatt, 1984; iNaturalist).