Home » GENERA D-F » Felicia » Felicia muricata
Back to Category Overview
Total images in all categories: 9,913
Total number of hits on all images: 4,614,401 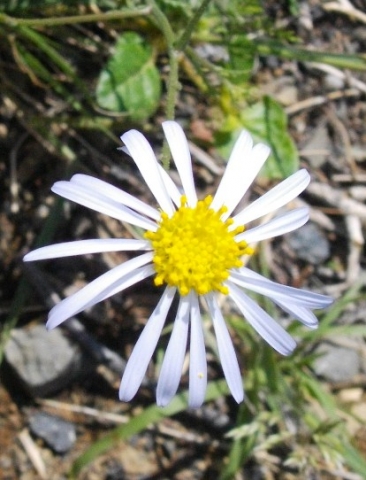 Felicia muricata is a small subshrub, much branched and sometimes woody at the base. It does not sprout after fire.

In Afrikaans it is called bloublommetjie (little blue flower) or taaibloublommetjie (little sticky blue flower). It has mauve-blue ray florets around the yellow disc. They may, however, be quite pale as in the photo taken near Touwsrivier. The flowers may sometimes even be white. The Zimbabwe form is described as having a white flower; one has to bear in mind that there are different subspecies of this plant, particularly in Zimbabwe and Botswana.

The distribution is very wide, suggesting variation across the diverse habitats that range from the Cape Peninsula to tropical Africa.

F. muricata is described growing on clay soils in grassland of the Rift Valley in Kenya, bearing blue flowers.

Another twist in the colour tale of F. muricata comes from the Karoo: Shearing writes that the flowerheads appear yellow in the morning, blue in the afternoon. The ray florets roll back at night below the yellow discs, hiding their blue surfaces until the sun warms them up into spreading again.

The species is not considered threatened early in the twenty first century (Vlok and Schutte-Vlok, 2010; Shearing and van Heerden, 2008; Bond and Goldblatt, 1984; Blundell, 1987; www.zimbabweflora.co.zw; www.redlist.sanbi.org).