Home » GENERA D-F » Felicia » Felicia muricata bud
Back to Category Overview
Total images in all categories: 8,883
Total number of hits on all images: 3,862,678 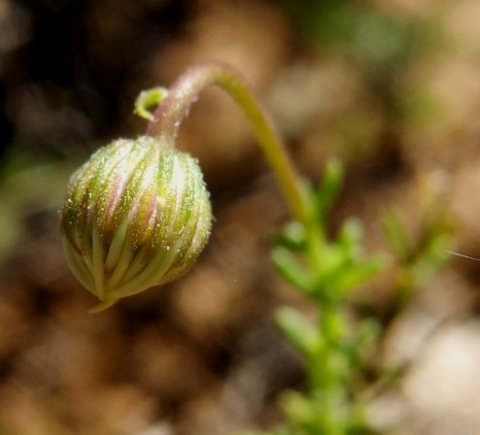 This nodding Felicia muricata bud will, when it opens, be held erectly by its sparsely hairy peduncle. A solitary narrow green bract curves in near the bud on the peduncle; there are sometimes two of them opposite each other (or nearly so) and sometimes several pairs up the stalk.

About orb-shaped at this stage, the bud is hairy upon the green surfaces of the almost linear bracts growing from the base. It appears as if there are only two rows of bracts in this involucre. The pale outer surfaces of the emerging ray florets are pushing against the involucre and forcing the bracts apart, soon to radiate widely around the central yellow disc of the open flowerhead. The rays, about the same width as the bracts, have no hairs. Open flowerheads measure about 2 cm in diameter.

Flowering is said to happen in spring and summer, although this bud was photographed near Oudtshoorn in April (Vlok and Schutte-Vlok, 2010; iSpot).