Home » GENERA D-F » Felicia » Felicia fruticosa
Back to Category Overview
Total images in all categories: 9,579
Total number of hits on all images: 4,307,190 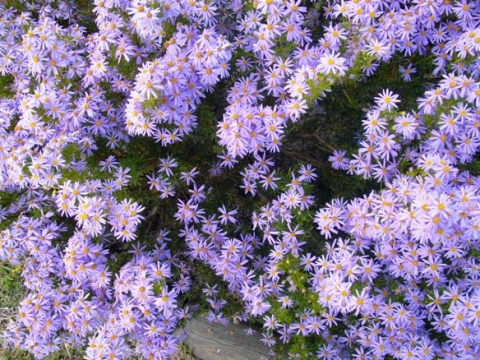 Felicia fruticosa is a shrub that flowers profusely and spectacularly in spring. Common names of shrub aster and bush felicia for it have been encountered. It has an intriguing natural habitat: Two small areas, one in the extreme south-western part of the Western Cape, the other in the north-eastern Soutpansberg area of Limpopo, about 2000 km apart, are noted as the plant’s distribution area! The one area is Mediterranean with winter rain, the other sub-tropical with summer rain.

The leaves of the plant are small, fleshy, occurring in whorls. The small daisy or radiate flowerhead is pinkish or mauve, sometimes blue. The flower disc is small and yellow. Three or four rows of involucral bracts occur on the outside of the flower base (Manning, 2009).