Home » GENERA D-F » Felicia » Felicia muricata in the Karoo
Back to Category Overview
Total images in all categories: 8,883
Total number of hits on all images: 3,862,697

Felicia muricata in the Karoo 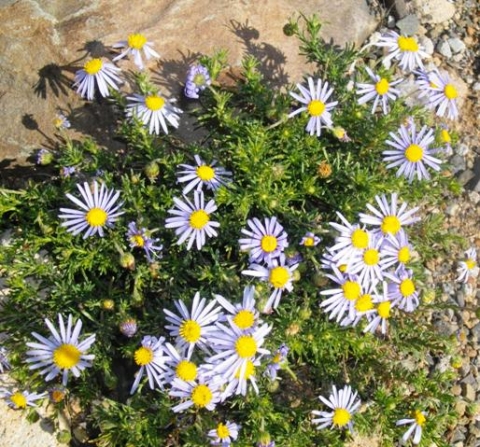 Although distinguishing among some of the Felicia species of the South African semi-arid inland areas is risky business, this one is thought to be Felicia muricata. It was seen near Beaufort West flowering in autumn.

There is a story that small pieces of the plant were sometimes used in the food of crime suspects to induce confessions. One trusts that the use of the plant as a truth drug was different from certain medieval practices of uncovering witchcraft where surviving the test signified guilt. What effects ingesting parts of this plant has on people is not known. When in doubt, don't eat it!

The plant is in some places moderately to heavily browsed, in other regions not or hardly. It is known as one of the species commonly hosting Thesium namaquense in the Karoo, a root parasite containing a substance toxic to sheep (Shearing and Van Heerden, 2008; Vlok and Schutte-Vlok, 2010; Vahrmeijer, 1981).