Home » GENERA E-F » Erica » Erica quadrangularis
Back to Category Overview
Total images in all categories: 11,538
Total number of hits on all images: 6,618,324 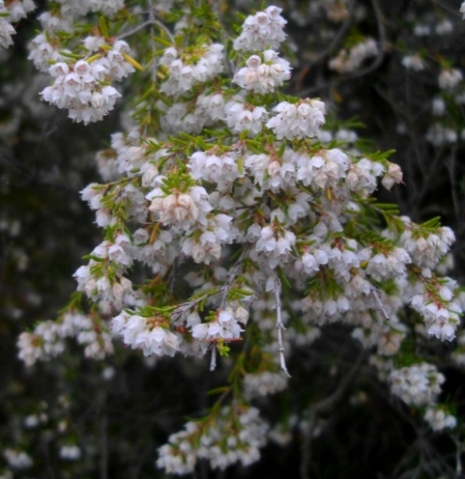 Erica quadrangularis is a notably floriferous species, producing many small, white or pink flowers from winter to early summer. Flowers grow in clusters of up to four at the tips of small side-branches. The small calyx reaches less than halfway up the corolla. The sepals are coloured nearly the same as the corolla, hairy or not and lance-shaped with acutely pointed tips.

The hairless corolla is broadly bell-shaped or four-angled. The specific name quadrangularis means four-angled, referring to the corolla with its four petals. The corolla lobes are variously shaped, more or less erect and the spaces between them acutely angled. The anthers and style are included in the corolla cup. There are awns on the anthers (Baker and Oliver, 1967; Vlok and Schutte-Vlok, 2010; iSpot).