Home » GENERA E-F » Erica » Erica pubescens flowers
Back to Category Overview
Total images in all categories: 12,081
Total number of hits on all images: 7,379,568 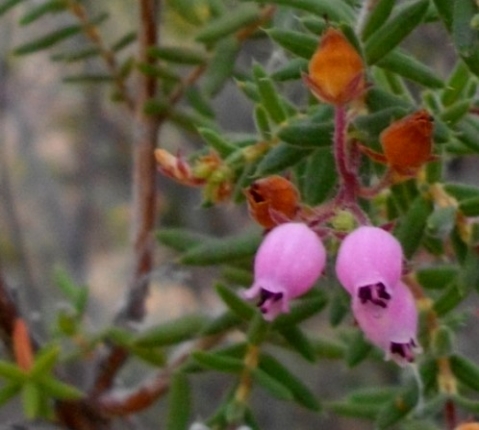 The small, velvety flowers of Erica pubescens nod on purple stalks of 6 mm, growing in small groups at stem-tips. There are short leafy bracts positioned a little behind the sepals, absent from many flowers on the bush photographed.

The narrow, leafy sepals at the corolla base are between 1,5mm and 2,8 mm long, longer than the bracts. The pointed, purple sepal tips veer away from the corolla.

The nearly spherical to urn-shaped corolla is white or pale pink in colour. Some orange-brown faded flowers are also in the picture. The four shallowly rounded lobes crowning the corolla are erect with a hint of curving out.

The dark anthers are included but not quite in old flowers. The ovary is top-shaped. The dark-tipped style presents its stigma slightly higher than the anthers.

Flowering happens from before midsummer to after midwinter (Baker and Oliver, 1967; Bond and Goldblatt, 1984; iNaturalist).