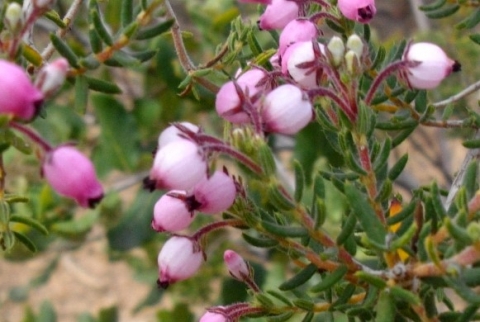 Erica pubescens is an erect, hairy shrublet reaching 60 cm in height. It forms part of the Ephebus Section of the Erica genus. Hairs are present upon stems, leaves, flower stalks, bracts, sepals, some of them glandular; short and velvety on the corollas.

Pubescent means covered with short, soft hairs or downy. It is derived from the Latin word pubens meaning the hair that appears on the human body at puberty.

Only few of the floral bracts, smaller than the sepals, are still present on the flower stalks in picture, a short distance behind the calyces. The older flowers, faded to white here (the other colour of this Erica), have their anthers protruding from the corolla mouths.

The species is distributed in the Western Cape from Clanwilliam and Worcester to the Cape Peninsula, the plant rarely seen in spite of its wide distribution.

The habitat is dry fynbos slopes at lower and middle levels. E. pubescens subsp. pubescens is not considered to be threatened in its habitat early in the twenty first century, while the survival status of the other subspecies, subsp. glabrifolia with name indicating hairless leaves, is unsure due to lack of data (Baker and Oliver, 1967; Bond and Goldblatt, 1984; iNaturalist; http://redlist.sanbi.org).