Home » GENERA E-F » Erica » Erica plukenetii at Fernkloof
Back to Category Overview
Total images in all categories: 11,656
Total number of hits on all images: 6,771,278 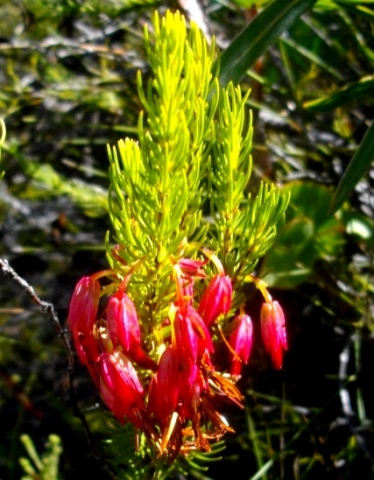 The flowers of Erica plukenetii, the coat-hanger heath and in Afrikaans known as hangertjie (little pendant), are usually pendulous or drooping (cernuous) as in the photo. The flowers of this species have many colours and forms, a notable one being the two-toned flowers of E. plukenetii var. bicarinata in which the sepals have a different colour to the corolla. Pink, orange, red-purple and white with green lobes are some of the colours the flowers may present.

The flowers grow solitary on long peduncles that vary between 8 mm and 12 mm in length. The bracts behind the flower are small and remote from the calyx. The membranous sepals are long, lanceolate, keeled and tapering to their tips. They are thin and dry. The corolla varies in length between 13 mm and 18 mm, the tube variably inflated near its base and slightly curved. The corolla lobes usually do not curve, but they are pointed, sometimes acutely, sometimes obtusely. The exserted, brown (or sometimes yellowish) anthers are long and linear.

Flowering happens throughout the year although less in summer (Baker and Oliver, 1967; Clarke and Mackenzie, 2007).