Home » GENERA E-F » Erica » Erica quadrisulcata
Back to Category Overview
Total images in all categories: 11,523
Total number of hits on all images: 6,605,264 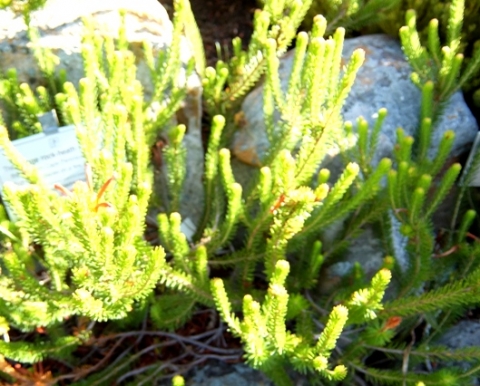 Erica quadrisulcata, the orange rock-heath is a rare species endemic to a small part of the Cape Peninsula. The plant is grouped among a few Erica species called Pleurocallis, all characterised by flowers that grow from leaf axils, tubes mostly over 12 mm long and corolla lobes not spreading in star-like fashion.

The species distribution of the orange rock-heath is in fynbos on high sandstone slopes where the land is protected south of Simonstown. While rare in nature, its population is stable early in the twenty first century inside the Table Mountain National Park (Baker and Oliver, 1967; Bond and Goldblatt, 1984; www.redlist.sanbi.org; www.plantzafrica.com).