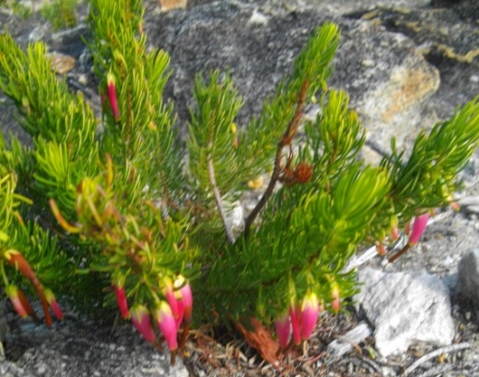 Erica plukenetii often becomes a robust, erect shrub of up to 2 m in height. The very long-exserted anthers present a clue as to the identity of the species, as does the inflated corolla tube base. The closest resemblance to another species is found in E. coccinea that has large bracts lying over the sepals. The plant was named for Leonard Plukenet, a 17th century English botanist, so there is no revealing knowledge about E. plukenetii to be gained from the specific epithet.

The plant is found widespread in mountain fynbos of the southwestern Cape as well as on slopes in Namaqualand. It is regarded as the most widespread Erica species of the western parts of the Cape Floristic Region.

This dark pink specimen was photographed on Hoy's Koppie in Hermanus during May (Baker and Oliver, 1967).