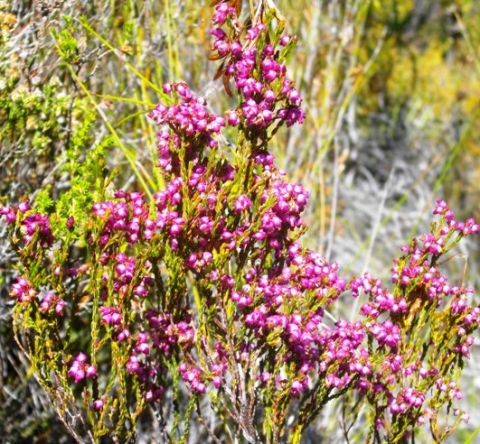 Erica rhopalantha is very similar to the more common E. coriifolia. They often grow in the same places, but flowering times do not generally coincide. E. rhopalantha has bigger flowers on a smaller shrublet (about 30 cm) with numerous slender branches. The plant is hairless all over.

Leaves grow in threes or opposite, adhering to the stems. The leaves, only about 2,5 mm in length, are linear or narrowly oblong with acute tips and marked with grooves.

Many flowers of a maroon-pink, rosy or pale red colour appear near stem tips, from the end of spring to the end of autumn. The corolla is urn-shaped to cone-shaped with a broadly bulging base and a slender throat. The specific name rhopalantha comes from the Latin word rhopalon, meaning cudgel or club. Corolla lobes curve outwards; they are about a quarter of the length of the corolla tube. Broad, obovate sepals, coloured the same as the corolla, clutch more than half of it. The sepals have dark keel tips, conspicuous around the corolla.

The plant grows on sandy flats and low slopes from the Cape Peninsula to Bredasdorp, not considered threatened early in the twenty first century. E. rhopalantha var. rhopalantha is a dark pink to mauve form growing in the same distribution area. There is another variety listed, E. rhopalantha var. delapsa, said to be planted in gardens in Australia (Baker and Oliver, 1967).