Erica recurvata back after 200 years 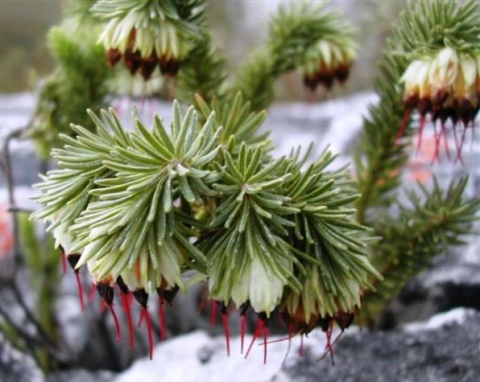 Erica recurvata is the species that made a spectacular comeback after about 200 years when found flowering near Napier in 2007. One of South Africa’s rarest plants, it belongs to the small Oxyloma section of the Chlamydanthe subgenus of Erica, characterised by large sepals over urn-shaped to cup-like corollas. The three Oxyloma species have the styles of their flowers exserted, their anthers included in the corollas.

E. recurvata is a small, branched shrub of between 30 cm to 60 cm in height. Its leaves are narrowly linear, needle-like and pale green to grey-green in colour. The specific name, recurvata, was derived from the recurving habit of the leaves. The leaves ascend densely up the stems in whorls or spiralling.

The species distribution is certainly tiny, confined to the area where it was rediscovered in the rocky, mountainous terrain of the Overberg.

A painting of E. recurvata, about 200 years old, first brought the species renown. Whether it will become better known among gardeners (and hopefully in the veld), after early successes of plant propagation, remains to be seen.

Best conservation practices and citizen commitment will ensure that there are not too many more beautiful plants disappearing for long or forever from the fynbos (Die Burger, 22 June 2012; www.plantzafrica.com).