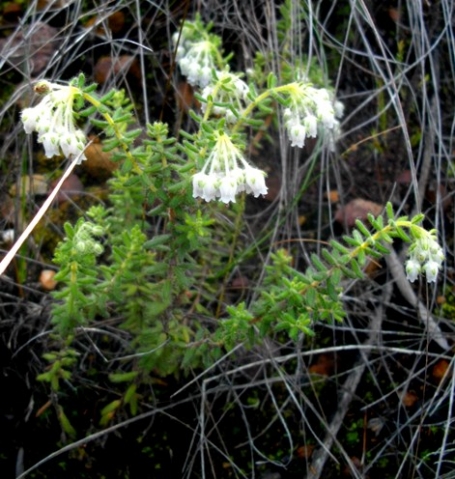 Erica pannosa, previously known as E. barbata on account of its hairiness (or beardedness), is an erect, hairy and sticky shrub reaching 1 m; probably mostly well below that height. E. perlata is a very similar, related species occurring in a largely overlapping distribution, but usually at higher elevations. Both species belong in the Ephebus section of the Euerica subgenus comprising plants with short corollas that are not tubular.

Two variants of a species that cause a grey area as to whether they should be lumped together or split apart in taxonomy, solve their problem later, when all the debating scientists are dead, their distant offspring becoming sure from further evolution that have increased the gap. Maybe reduction to one unambiguous species occurs when one of the variants finds life too hard and disappears. Evolving back together in a merger sounds unlikely, but rare things happen among the living.

The distribution of E. pannosa is fairly small, in the Riviersonderend Mountains. The plant in picture was encountered near Greyton. The habitat is lower fynbos slopes. Some habitat degradation is happening through farming and alien plant invasion (Bond and Goldblatt, 1984; Baker and Oliver, 1967; iSpot).