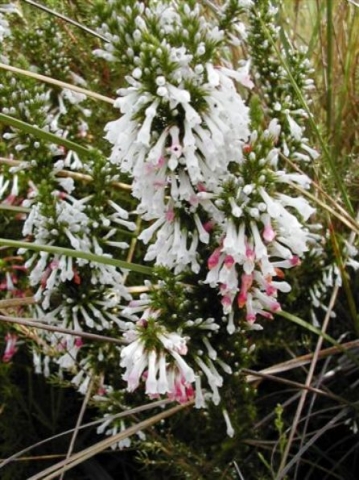 Erica perspicua is one of the best known and popular flowering members of its illustrious genus. No wonder that it is crowned with a distinguished name for everyday use as well, viz. the Prince of Wales heath, that relates the flowers to the plumes in the Prince's crest.

The shrub often grows taller than 1 m, sometimes 2 m. The very short leaves and flowers are finely hairy. The flower colour is highly variable from white, pink, combinations of the two, as well as showing red or purple. Flowering occurs from spring to after mid-autumn.

This Erica is strongly established in the Kogelberg area and prominent around Betty's Bay to around Stanford in a small natural distribution. The habitat is marshy, fynbos slopes and flats. There are two subspecies, subsp. perspicua not threatened, while subsp. latifolia is deemed vulnerable early in the twenty first century (Eliovson, 1984; www.plantzafrica.com; http://redlist.sanbi.org).