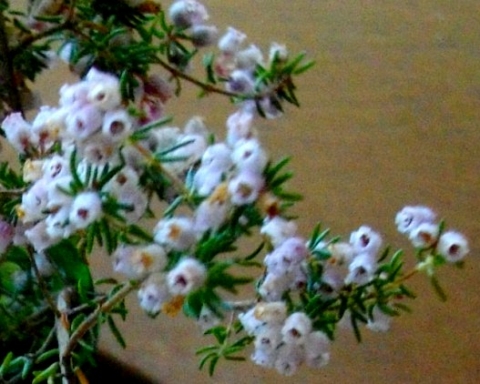 Erica parviflora is one of the true heaths in the subgenus Euerica, an erect shrub growing to 1 m in height.

It belongs in a section of Erica species called Ephebus, characterised by short terminal flowers that are hairy and have anthers usually included in their urn-shaped corollas. The corolla lobe tips of the small whitish flowers in picture recurve around the mouth that is wide enough for the dark anthers to be seen inside. Flowers may also be pink or magenta. The specific name, parviflora comes from the Latin, parvus meaning small and flora referring to flowers. Flowering happens from spring to autumn. The leaves grow in groups of three on the stems.

The species is distributed from the Cape Peninsula to Worcester and Bredasdorp where the plants grow in fynbos-covered sandstone mountain slopes. There are about seven varieties of E. parviflora, most of which are not considered to be threatened in their habitat early in the twenty first century.

The plant resembles E. intervallaris apart from flower hairiness and leaves not in groups of four (Bond and Goldblatt, 1984; Bean and John, 2005; iSpot; Andrew, 2012; www.redlist.sanbi.org).