Home » GENERA E-F » Erica » Erica multumbellifera flowers
Back to Category Overview
Total images in all categories: 11,131
Total number of hits on all images: 5,810,380 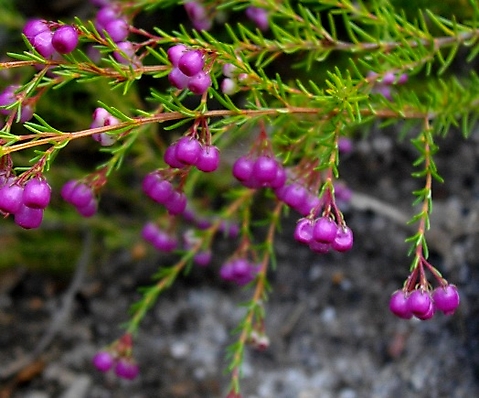 The small, musty-scented flowers of Erica multumbellifera grow at stem-tips in small, drooping, umbel-shaped clusters on red peduncles only 1,5 mm long. The specific name, multumbellifera, is derived from the Latin words multus meaning many, umbella meaning umbel and fero meaning to bear or carry, referring to the numerous umbels of flowers borne in season.

The bracts below the flowers are small, the keeled sepals lanceolate. The Pachysa section of ericas produce flowers that are not tubular, usually shorter than 8 mm and without star-like lobes.

E. multumbellifera flowers are red-purple, the corolla globular to occasionally ovoid and dry, not sticky as most ericas of the Pachysa section. The lobes at the small flower mouth are tiny, protruding.

The anthers are included in the corolla, elliptic to triangular around the stigma. The ovary is sometimes hairy, the short style inside the corolla.