Home » GENERA E-F » Erica » Erica multumbellifera
Back to Category Overview
Total images in all categories: 11,131
Total number of hits on all images: 5,810,247 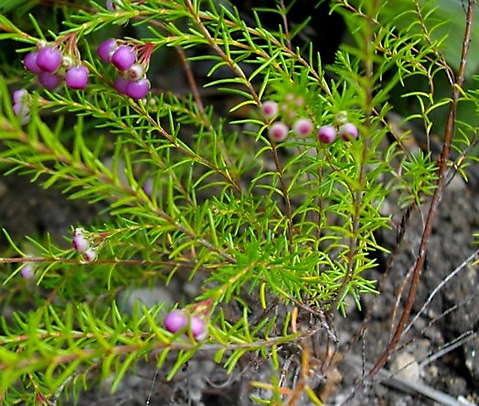 Erica multumbellifera, commonly known as bead heath and previously scientifically as E. ramentacea, is a bushy, profusely flowering, erect shrub of the Pachysa section of the Erica genus. The plants reach heights around 40 cm, often growing in large colonies.

The brown branches are sometimes finely hairy, sometimes smooth. The narrowly linear and glabrous leaves grow in whorls of four up the stems, appressed, ascending or curving out. Leaf length is from 3 mm to 6 mm.

The species distribution is only in the southwest of the Western Cape, from the Cape Peninsula to Tulbagh in the north and Riversdale in the east. The habitat is sandy flats and lower fynbos slopes (Manning, 2007; Mustart, et al, 1997; Baker and Oliver, 1967; iNaturalist; http://redlist.sanbi.org).