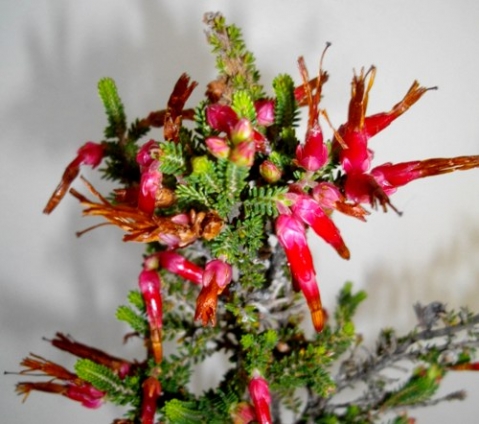 Erica monadelphia is an erect shrub growing stout branches robustly from a persistent rootstock, reaching 60 cm in height. The hairless leaves overlap densely, growing in ascending vertical arrays up the stems. Leaf shape is linear, triangular in cross-section (trigonous) and grooved. They become up to 5 mm long.

The species belongs in the Didymanthera section of the Syringodea subgenus, meaning that the plants grow tubular flowers that are hairless and sticky. Flowers of plants in this section grow at branch tips and have exserted anthers.

The flowers of E. monadelphia grow on short stalks (about 3 mm). They are crimson-red with little colour variation. Both the short bracts at the flower base and the slightly longer sepals inside the bracts are pinkish red, folded over the base of the darker corolla. The corolla lobes are erect and short. The filaments have a characteristic kink below the anthers. Flowering happens from midsummer to mid-autumn or upon resprouting after fire.

The species distribution is along the southern coast of the Western Cape from the Cape Peninsula to Riversdale, the plants found at low altitudes on sandy slopes. The species is not considered to be threatened in its habitat early in the twenty first century (Baker and Oliver, 1967; Bond and Goldblatt, 1984; www.redlist.sanbi.org).