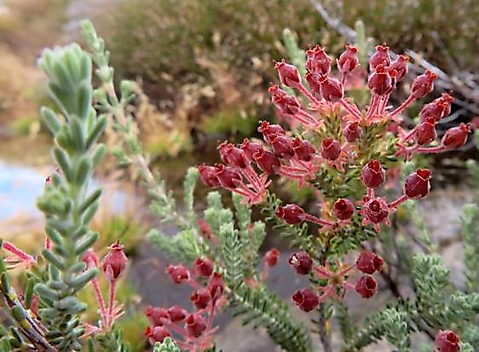 The plant in picture is thought to be Erica oresigena. Unfortunately, the flowers appear already discoloured from withering, the old flowers drawn erect in picture. E. oresigena is a branched, sturdy shrub of the Ephebus section of the Erica genus, reaching heights from 1 m to 2 m.

The small oblong and blunt-tipped leaves ascend in whorls up the pale, young stems. They are hairy with margins rolled under in ericoid fashion. Old wood tends to become leafless.

The inflorescences are few-flowered terminal clusters, the flowers nodding on long pedicels. The small, narrow sepals are oblong, lying on the back of the corolla. The urn-shaped corolla is rose-pink, four-lobed, small-mouthed and faintly hairy, about 5 mm long. The anthers are not exserted.

The species distribution is in the Western Cape from Clanwilliam to Worcester.

The habitat is upper fynbos slopes and summits where the plants grow in sandstone derived, acid soils receiving winter rain. The species is not considered to be threatened in its habitat early in the twenty first century (Bond and Goldblatt, 1984; Baker and Oliver, 1967; iNaturalist; http://redlist.sanbi.org).