Home » GENERA E-F » Erica » Erica oblongiflora flowers
Back to Category Overview
Total images in all categories: 11,131
Total number of hits on all images: 5,810,114 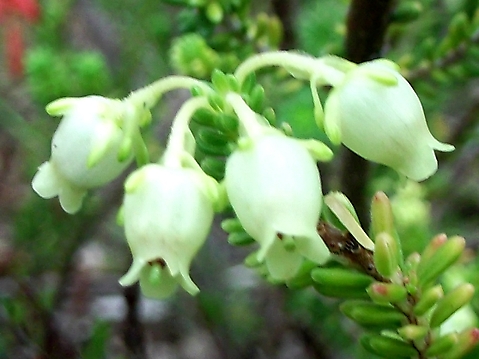 The nodding flowers of Erica oblongiflora grow in terminal umbels, the stalks of flowers in each cluster about equal in length. Floral bracts are pale and leaf-like, high up on the stalks, near the sepals that are similar in appearance.

The sticky corollas are ovoid, more urn-shaped than oblong, their colour faint green or cream, in picture nearly white. The four, shallow lobes of the corolla curve out slightly. Stamens and styles are included in the corolla that becomes about 8 mm long.

Flowering happens from before midautumn to after midwinter (Mustart, et al, 1997; Bond and Goldblatt, 1984; iNaturalist).