Home » GENERA D-F » Erica » Erica oblongiflora
Back to Category Overview
Total images in all categories: 10,855
Total number of hits on all images: 5,509,084 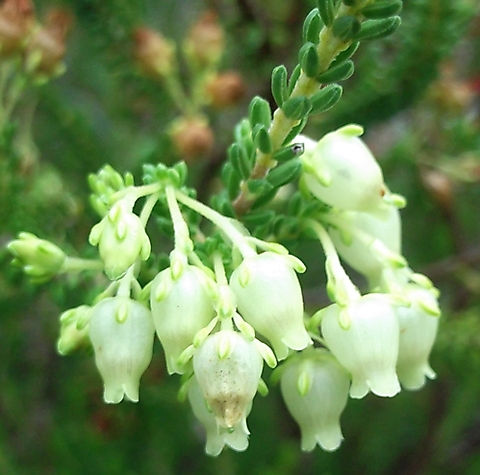 Erica oblongiflora, commonly known in Afrikaans as groentaaiheide (green sticky heath), is an erect shrub in the Pachysa section of the Erica genus. The plant grows rigid branches that spread and reach heights around 1 m.

The faintly hairy leaves grow in spaced whorls of four or five. They are stubby, oblong to barrel-shaped with tips rounded or blunt and the margins rolled under, leaving a slit below.

The species distribution is along the south coast of the Western Cape from Bredasdorp to Infanta across the Agulhas Plain.

The habitat is fynbos and dune strandveld on limestone slopes and flats in the winter rainfall region. The species is considered to be endangered in its habitat early in the twenty first century, due to range restriction compounded by farming activities, alien vegetation invasion and coastal development (Mustart, et al, 1997; Bond and Goldblatt, 1984; iNaturalist; http://redlist.sanbi.org).