Home » TYPES » Trees » Nicotiana glauca flowers
Back to Category Overview
Total images in all categories: 11,506
Total number of hits on all images: 6,493,898 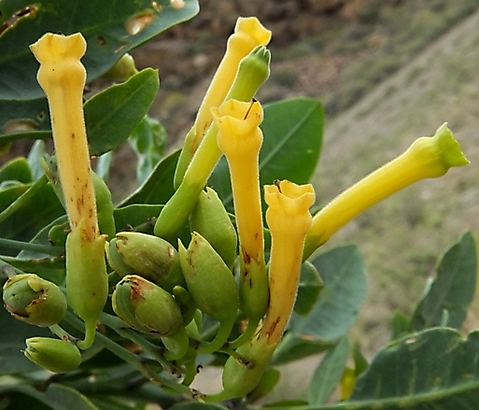 The yellow or pale to greenish yellow flowers of Nicotiana glauca grow on curving pedicels in loose, often drooping clusters from stem-tips. The narrowly cylindrical corollas are long, bulging near their tips, just before the short petal lobes angle out. The corolla is from 3 cm to 4 cm long.

In bud the green petal tips appear pointy, while when open there is little variation in height between the five, slightly pointed tips and the adjoining areas. The broader, short calyces have more point to their green sepal tips.

The stamens are included in the corolla tube, while some styles in picture are exserted, the stigma small and capitate. The plants are pollinated by sunbirds in South Africa, by hummingbirds in its native South America, but also extensively by several short-beaked, nectar robber birds that pierce holes near the base of the corolla tubes where the relatively sugar-rich nectar is accessed. Other robbers are insects like honeybees that may use the same holes made earlier by stronger beaks repeatedly.

The nectar is important to bird and insect users in the semi-arid regions where these plants are widely distributed, assisted by climate change to spread even further. This plant also self-pollinates, extensively in some of the regions where it has become invasive.