Home » TYPES » Trees » Nectaropetalum capense
Back to Category Overview
Total images in all categories: 11,912
Total number of hits on all images: 7,163,176 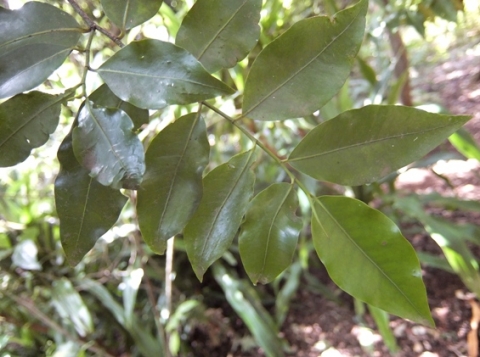 Nectaropetalum capense, the southern false coca tree, is often a small tree of about 4 m but occasionally reaches 15 m in height (SA Tree List No. 246).

The leaves are simple and alternate, growing on petioles of about 6 mm long. The stipules that grow at the base of the leaf stalks are notably spike-like. They drop off early, but one pale cream-coloured one, resembling the base of the leaf midrib, is visible in the photo at the terminal leaf on the right.

Leaf-shape is elliptic, tapering to the tip as well as attenuating slightly. The leaf base is square to rounded. Leaf margins are entire and slightly wavy. The leaf surface is bright green, leathery and glossy. The leaf midrib is cream coloured to green, the lateral veining and reticulate net-veining more visible on the lower surface. This veining is translucent when held against the light; it is raised on the upper surface. Leaf dimensions are up to 10 cm by 5,5 cm, but usually much smaller.

Scented greenish white flowers with narrow white petals grow solitary or in pairs on short stalks from leaf axils from midwinter to spring. The small fleshy ovoid fruit, up to 1 cm long, are green on the tree and yellow once they fall. Birds eat the fruit.

The species distribution is coastal in the east of the Eastern Cape and the south of KwaZulu-Natal.

The habitat is forests and forest margins, common in coastal forests and thriving in poor soil. The species is not considered to be threatened in its habitat early in the twenty first century (Coates Palgrave, 2002; Pooley, 1993; http://redlist.sanbi.org).