Home » TYPES » Trees » Myrsine africana fruit
Back to Category Overview
Total images in all categories: 11,506
Total number of hits on all images: 6,499,438 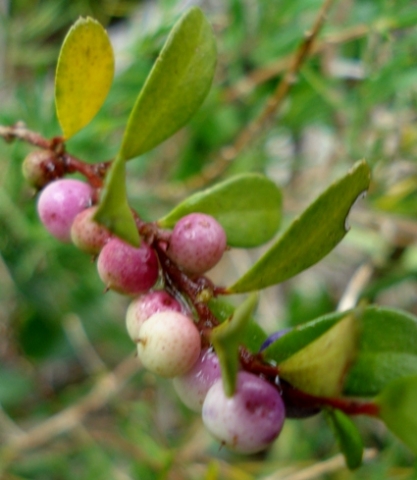 The fruit of Myrsine africana are thinly fleshy, changing colour repeatedly. This colour change serves to assist consumers, the fruit dispersers, in assessing the stage of ripening and the time to ripeness; a common attribute of so many fruit bearing species. Sparse surface mottling and the style remains can be observed on the fruits in picture. The photo was taken in November in the Caledon Wildflower Garden.

The species distribution is widespread in much of South Africa, present in all provinces except the Northern Cape, also found in Zimbabwe and further into tropical Africa.

The habitat is open woodland, evergreen forest margins, often among rocks and at a wide range of elevations. The species is not considered to be threatened in its habitat early in the twenty first century (Coates Palgrave, 2002; Van Wyk and Van Wyk, 1997; http://redlist.sanbi.org).