Home » TYPES » Trees » Myrsine africana
Back to Category Overview
Total images in all categories: 11,923
Total number of hits on all images: 7,173,613 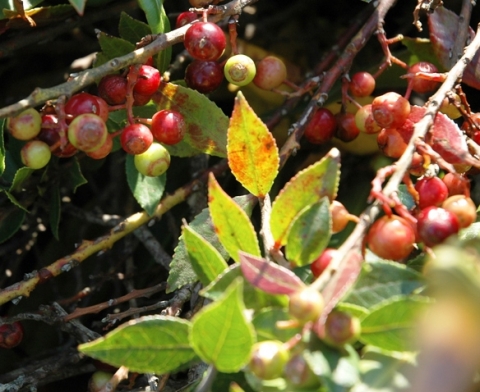 Myrsine africana, the Cape myrtle and in Afrikaans mirting, is a suffrutex, a shrub or rarely a small tree (SA Tree List No. 577.1). A suffrutex is a perennial plant slightly woody only at the base.

The fruits visible in the picture are globular, 0,4 cm in diameter.

The species distribution range is a broad swathe across South Africa from the Cape Peninsula across the Eastern Cape and KwaZulu-Natal to the Lowveld and much of the region north of the Vaal River. The only province in which it doesn't grow is the Northern Cape, while M. africana is also found in Zimbabwe and further into tropical Africa.

The habitat is diverse, including open woodland and evergreen forest margins, often in rocky places and as a pioneer species. The species is not considered to be threatened in its habitat early in the twenty first century (Coates Palgrave, 2002; http://redlist.sanbi.org).