Home » TYPES » Trees » Mundulea sericea subsp. sericea
Back to Category Overview
Total images in all categories: 11,912
Total number of hits on all images: 7,163,125 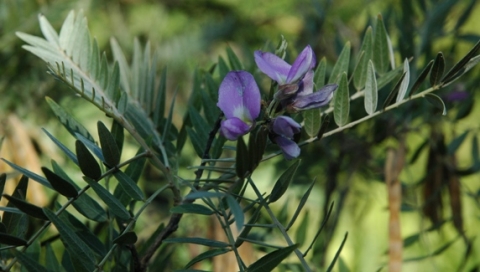 It has compound leaves, each comprised of six to eleven pairs of leaflets plus a terminal leaflet (an imparipinnate leaf structure). The leaflets are grey-green and covered in silvery hairs that are also present on the smaller branchlets and the flower stalks. These hairs contribute to the tree’s overall silvery appearance. The leaflets are lanceolate in shape with tapering tips and entire margins.

The trees grow in the north-east of South Africa, all the provinces north of the Vaal River and KwaZulu-Natal, as well as widely across southern Africa.

The habitat is wooded grassland, open woodland, sandy flats and stony slopes; also near rivers. The subspecies is not considered to be threatened in its habitat early in the twenty first century.

The roots have been used in the treatment of infertility (Coates Palgrave, 2002; Schmidt, et al, 2002; http://redlist.sanbi.org).